The transcendent, electronic pop beats with ethereal notes from Peakes set the evening off to a great start with highlights including ‘Waves’ and ‘Spaces.’

Outlya got the party started early, joining the queue outside the venue before the doors opened with a portable keyboard in hand.  Revving the early comers with a call and response, Outlya had us anticipating more and they definitely did not disappoint as they showed us ‘the light’ on the way to ‘heaven.’ You could even say that we were dancing around the ‘volcano.’

On October 16th 2014 a younger version of myself stood in the very same room as I am now (said room being The Wardrobe in Leeds) and that is basically the story of how I fell in love with Dan Croll.

Fast forward to 2016 and Dan was to appear at that year’s Live At Leeds festival. Insert me awkwardly waving at Dan Croll before realising that Dan did in fact not actually know who the hell I was. Just me, being a crazy woman waving.

It’s 2017 and Dan Croll is back baby and his second album, Emerging Adulthood is set to be released in July.

So let us ‘Swim’  ‘Away From Today’  and omg Dan Croll just walked in, somebody hold me!

New songs from the forthcoming album were seamlessly woven with old favourites including the stunning ‘January’ and ‘Be Alone’ which bears a significant message, very poignant for #mentalhealthawareness week, that everyone wants to be alone sometimes and that it’s ok not to be ok.

A personal highlight of the evening was ‘From Nowhere’ which is actually my ringtone. After hearing the song oh so many times it was a massive privilege to hear it live once again so thanks Dan and I look forward to catching you again soon! 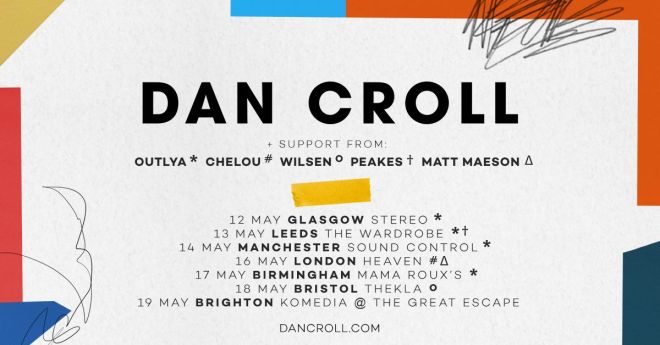